There is a new kid on the block - or, more specifically, a new DNA analysis company. LM Genetics, run by Lukasz Macuga, offers admixture reports based on your Eurogenes K36 results, which you can obtain from GEDmatch. Once you have your K36 results, you just send the numbers to LM Genetics by email; no raw data required, which is a very good thing from a privacy point of view. If you are not on GEDmatch, however, you will have to send LM Genetics your autosomal raw data file.

I decided to try this service because it's become quite popular in certain quarters of the online genetic genealogy community, and also because several people have recommended it due to its supposed ability to narrow your biogeographical admixture down to very specific regions all over the world, which would obviously be very helpful in genealogy research.

The report, called K36 Ancestry Report, costs 7 euros. I ordered two, one for my mother and one for my grandmother's brother. Both reports were ready five days after I placed the order, and were sent to me by email. 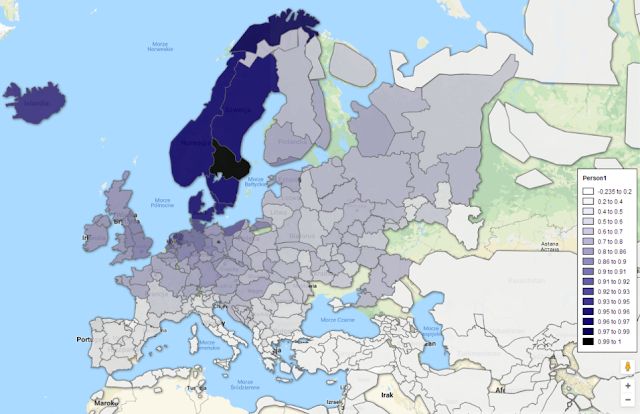 My mother's K36 correlation map. The darker the colour, the more genetically similar my mother is to the local population.


The LM Genetics report is lengthy and includes several admixture analyses based on different methods. I am not a statistician, so please bear with me; I will be interpreting the results to the best of my ability.

Since my mother's ancestral background is relatively homogenous, the best analysis for her is probably the nMonte3, which according to LM Genetics "works best for individiuals of a non-mixed background." My mother's nMonte3 analysis shows that she is genetically closer to Swedes from Svealand than to Norwegians. This might seem shocking at first (since she is Norwegian), but it actually makes sense, considering that most of her ancestors came from areas in Norway that are very close to the Swedish border, and she has close ancestors from Sweden itself. The report also shows similarity to populations around the North Sea, such as Icelandic, Dutch and English; although my mother does have known Dutch and Flemish ancestry, this is very distant (one line each in the 1500s), and the admixture estimates probably do not reflect recent ancestry, but rather affinities due to ancient common origins and historical migrations and mixing. But of course, you never know.

The most interesting part of my mother's nMonte3 analysis is her Eastern European and Finnish breakdowns.

My mother's Eastern European DNA is given a more specific origin: Central Poland. 0.4% of her admixture comes from this region, according to LM Genetics. Sadly, there seems to be no close connection with Ashkenazi Jews.

My mother's Finnish ancestry is broken down into specific regional categories:

This gives a total of 4.2% Finnish admixture, which seems reasonable. In fact, it seems like the most reasonable estimate she has been given anywhere.

The regional breakdown is extremely fine-grained. The East Finnish part is obviously correct, since my mother's Finnish ancestors were Forest Finns who emigrated mostly from the eastern parts of modern-day Finland to Sweden and Norway in the 1500s and 1600s. The 0.2% Karelian is extremely interesting, because some of my mother's Forest Finn ancestors were in fact originally from Karelia (the Mulikka and Hakkarainen families). The 1.6% Ingrian might come from Izhorian or Votic ancestors (which is absolutely within the realms of possibility), but it is more likely a reflection of the fact that people from eastern Finland and the Karelian Isthmus not only migrated west to Sweden and Norway, but also southwards to Ingria where they became the modern-day Ingrian Finns. I am not sure where the 1.8% South West Finnish comes in, but it might be related to the fact that some Forest Finn families were from Häme (Tavastland) in the more westerly part of Finland. 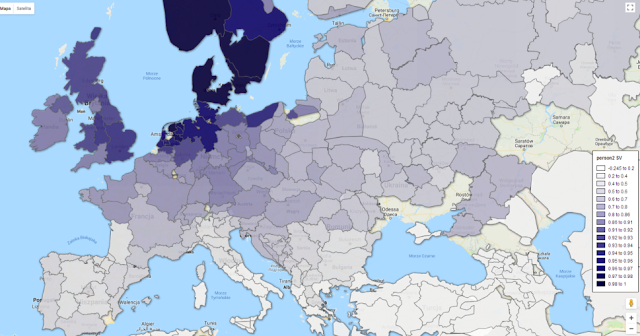 My grandmother's brother's K36 correlation map. The darker the colour, the more genetically similar he is to the local population.


My grandmother's brother's nMonte3 analysis is consistent with his primarily Norwegian and North European roots, a "North Sea mix" which includes Danish, Dutch, German, Scottish, English and Northern French ancestors. The analysis picks up his significant Scanian ancestry (given at 27.6%, which is an overestimate; the true number is 12.5%). His closest population is either Scanian or Danish, depending on the analysis method.

There are also some surprises...

First of all, the estimate contains Finnish categories (0.8% South West Finns + 0.2% East & North Finns = 1% Finnish total). Perhaps my grandmother and her brother have some Forest Finn ancestors? I have suspected this for some time, simply because they have ancestors who lived in areas populated by Forest Finns, but I haven't found documentary evidence for a Finnish connection yet.

The second biggest surprise is that my grandmother's brother has Eastern European admixture, from Poland and Russia (1% in total). This includes 0.2% Zaporozhe Cossacks, a very interesting group of Cossacks whom I had never heard about before.

The biggest surprise in my grandmother's brother's nMonte3 estimate is the 0.2% Sindhi admixture (not shown on the correlation map). At FTDNA, his strongest trace region is <2% Central Asia, which is centered on northern India and Pakistan. The Sindhi people live in this region. How does a Norwegian end up with Sindhi admixture? I can think of only one obvious answer: through Romani ancestors. I have suspected Romani ancestry on this side (in addition to the known Romani heritage on my mother's side) because of the strong Indian signal my grandmother's brother gets at FTDNA and in GEDmatch calculators. The LM Genetics analysis provides further confirmation that this admixture is real. The Norwegian and Swedish Romani are closely related to the Sinti of western and central Europe, and some believe that the word Sinti is in fact derived from "Sindhi". In the LM Genetics report, my grandmother's brother seems to have no significant similarity to any other South Asian population except Sindhi.

My grandmother's ancestral tree is well researched quite far back, but she has one great-great-grandmother of unknown origin. Signe (Signild) Persdotter was born in Trolle-Ljungby in Scania, Sweden in 1798, and since the local church archive burned down in the 1800s, all information about her parentage has been lost. I have found no other likely sources of Romani DNA in my grandmother's family tree, so I deem it likely that Signe, or at least one of her parents, was ethnically/culturally Romani. It is not proven, though. I am still looking for DNA matches that might give more insight into Signe's origins.

I am very happy with the reports, and I am certainly not done with exploring the results. Remember that the reports are based only on Eurogenes K36 numbers. I am amazed that it is possible to get so much information out of so little!

There are certain bits of admixture that are not picked up (such as the West African segment, which is admittedly extremely small), but the bits that are picked up are broken down into very informative regional categories, just as I was told. I am particularly pleased with the Finnish breakdown, which (at least in my mother's case) correlates very well with what is known about Forest Finns and their history.

I also like the fact that the report contains so many different admixture analyses, suited for different purposes and visualized in a variety of ways (the correlation map is very nice-looking). The report might look a bit technical at first glance, but once you start seeing what the numbers actually mean, if you are a geek like me, you will be absolutely fascinated. I always prefer getting information as unfiltered as possible, so I can draw my own conclusions. If you're used to the GEDmatch Oracles, reading this report will not be too difficult.

My only disappointment with the report is that there are no micro-level regional breakdowns within Norway - there is only Northern Norway (Troms and Finnmark counties, judging from the map) and the rest of Norway. I wish there was a way to provide more fine-scale breakdowns of Norwegian admixture. I guess more references are needed, and I hope they will be added in the future.

Thank you, Lukasz!
Posted by Miriam Aurora at 14:38

I am Miriam. Welcome to my Genealogy Corner! I am a transgender woman from Norway, currently living in South Africa where I am working on ...